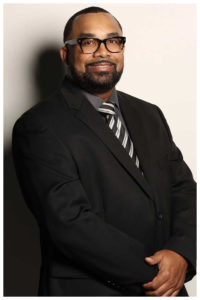 Anthony T. Jackson is a life-long resident of the City of Detroit.  He graduated from St. Martin De Porres High School where he drew the attention that led him to earn a full football scholarship to the University of Cincinnati. There he majored in business with a minor in communications.  His resume spans several industries where his hard work and tenacity resulted in a great deal of success over the years.

Anthony’s performance with AT&T warranted him an award that was presented to him in Washington DC.  His professionalism and salesmanship kept him lead in sales with Sprint, so much that he was offered the opportunity to manage a store within 6 months of hire. He has also been an entrepreneur in the Real Estate Investment Industry where he influenced portfolios worth several million dollars, and at the same time, maintained several profitable shopping websites.

In more recent years, Anthony has made tremendous strides in workforce development. His ability to motivate hard to serve populations has placed him in the ranks among the best in the industry in the areas of job placement, job readiness training and retention. He remains first in job placement among his peers in employment and training, this being attributable to his ability to communicate with the business community in a way that allows them to see the benefit of working with those who have been most negatively affected by our troubled economy.  His work is so well respected with Michigan Works that he was asked by management to take the lead on The Clean Energy Taskforce.

Anthony’s decision to open Emerging Industries Training Institute stemmed from his frustration with the lack of quality training institutes available for residents of the city of Detroit. Jobseekers would expend all available resources for training and remain jobless due to the extreme disconnect between training and employment opportunities. Anthony saw a need and met it by opening a high performing proprietary school offering employer-led training.

In spring 2009, Anthony was certified by the State of Michigan as a Business Solutions Professional (CBSP). He is also a certified Job Readiness Trainer.  His professional affiliations include: Kappa Alpha Psi; Ron Rice Foundation; and Detroit Police Athletic League. Anthony also contributes and volunteers in his community as the Head Volleyball Coach for Dearborn Henry Ford Academy and the Detroit Police Athletic League/Track Life University Head Coach.